September – October 2006: Where is the road to Europe, joint project with the German NGO „Gruener Grashalm“. The project received financial support from the EU Programme Youth in Action.

October – December 2004: “Children against the smoking”, project realized in all school in Blagoevgrad, financed for the second time from the Bulgarian Ministry of Health

November 2003: “Children – the most vulnerable part of the society to the environmental pollution”. Research for air pollution impact to children health. Join project with Inspectorate for Hygiene and Epidemiology, Pernik

October 2003: “Children against the smoke” – activities for reducing children smokers.

November 2002: Development of Environmental NGOs Electronic networking in Bulgaria. Training workshop for NGOs with the cooperation of Bluelink Foundation.

August 2002: Web based National Water Database. Creation of river baisens water database in Internet with the sponsorship of Bluelink Foundation and partnerships of Ministry of Environment and Water and Bulgarian Academy of Sciences, Insitute of Water Problems.

January 2002: Farmers Tour in Bulgaria. Three North American farmers, Canadian Percy Schmeiser and Tom and Gail Wiley from the U.S., all personally impacted by the commercial cultivation of genetically engineered (GE) crops in Canada and the US met farmers and agricultural and environmental decision-makers and urged them not to allow GE crops and food into Bulgaria.

December 2001: Creation of A Basin Council in the Western-Aegean Region and provision of condicions and opportunities for raising public awareness and public participation in the decision-making process on the design of Plans for Integrated Water management of the basins of the rivers Struma and Mesta and the implementation of the Water Act and the European Water Framework Directive. The project is financed by the MATRA/KAP Programme of the Netherlands Government.

November 2001: „Dessimination of GMO plants in Bulgaria“ – 20-ty minutes film explicitely proved that the reality is diagonally different than the oficial position: GE corn harvested was not bought back by the distributors of seeds and it remained in the country, buffer zones were not kept, GE crop was not stored in separated stores and this way was not segregated from non GE crops.

January-May 2001: Consolidation of Public Participation in the Debates on Genetic Engineering (2001). The project comprises translation from English into Bulgarian and printing of the book About the Kings and the Cabbage. Financed by the Regional Environmental Center, Budapest.

May 2000 – May 2001: Joint project of the Municipality of Blagoevgrad, the Eco-Club Terra and Ecosouthwest. Introduction of Market Mechanisms for Improvement of Waste Management in Blagoevgrad (2000-2001). Objective: separate collection of ash from urban waste in almost the entire city of Blagoevgrad, collection and composting of organic waste in the neighborhood Blagoevgrad-West , introduction of new organization of city cleaning. The project was financed by the Ecolinks Programme of the US Government.

December 2000: Translation and printing of the report on EU Expension and Genetically Modified Organisms – Chasing a Moving Target, with financial support from the JMG Foundation, Great Britain.

November 2000: A project for cleaning and vegetation planting in the city of Simitly was implemented with financial support from the Ministry of Environment and Waters.

October 2000: We organized and conducted a national seminar on Genetically-engineered food stuffs and agriculture for NGOs and journalists with the participation of representatives of three ministries – the Ministry of Environment and Waters, the Ministry of Economics and the Ministry of Health Care. A group of eight NGOs set up their own e-mail network and started to work jointly on the issue. The project was financed by the JMG Foundation.

February-May 2000: In a joint effort with ANPED we carried out a national study and published a report on Bulgaria – a corporate test ground for genetically engineered foodstuffs and agriculture. The project was financed by the JMG Foundation.

November 1999: In collaboration with the Expert Group of NGOs with the Council for Environmental Management of the Municipality of Blagoevgrad we implemented a project on Partnership for a Clean Blagoevgrad. Thus we were able to combine the efforts of all the environmental organizations and environmental clubs in the city. The project was financed by the municipality.

November 1999: Together with the regional organization of Euroroma we implemented the project Cleaning of Ravines and Vegetation Planing in the city of Simitly. The project was financed by the Ministry of Environment and Waters.

October 1999: Ecosouthwest and Euroroma organized jointly two environmental feasts for Roma children, comprising cleaning of the city park and a competition for children’s paintings. The funding was provided by the Municipality of Blagoevgrad and the Ecology, Sports and Health Foundation.

June 1999: In collaboration with the Hygiene and Epidemiology Institutes in Blagoevgrad, Pernik and Kyustendil we implemented the project Regional Campaign Against Genetic Engineering. The project was designed for mothers and small children, who are the risk groups with respect to consumption of this type of foodstuffs.

November 1998: Together with the Municipality of Blagoevgrad and the environmental club Terra we implemented a project for split collection of ash from other types of urban waste in one neighborhood of Blagoevgrad.

June 1998: We organized a national seminar for NGOs on The Road to the European Union – Environmental Legislation, financed by Milieukontakt, The Netherlands.

April 1998 – 2000: We organized a weekly broadcasting programme SOS-Nature! In a joint effort with Radio Blagoevgrad. It provided an opportunity to the listeners to share live their proposals and problems and to ask questions. 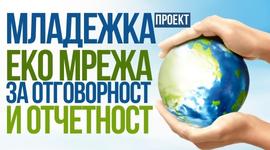