NGO Ecosouthwest is active at the national level on the subjects of Water Management and Genetically Modified Organisms. At the regional level is operates actively also on the issues of Biodiversity, Environmental Education and Waste Management.

The beginning of our campaign against genetic engineering was laid in 1998. Since then our representatives take regularly part in seminars organized by our partners from the Western European countries. The year 2000 marked a push forward in this field, since we received a grant from the JMG Foundation. Thanks to our initiative and the support obtained from ANPED, Iza Kruszewska, we conducted a national study on the spread of genetically modified foodstuffs and plants in Bulgaria. The results of this study was published in www.bluelink.net/gmo.

Thus, thanks to the financial support from the JMG Foundation, the Bulgarian NGO „Ecosouthwest“, realized its Anti-Genetic Engineering (GE) Strategy for 2000, and achieved the results below:

A Regulation for labelling of genetically modified soya and maize will enter in force in July 2001.

Thanks to the media involvement, a public discussion was launched.

The Ministry of Economy and the Ministry of Environment and Water accepted our position about the Law on Genetic Modified Organisms (GMOs) and the chief of the Parliamentary Environmental Commission, Lachezar Toshev, made recommendations concerning the Draft-Law on GMOs to the Bulgarian Council of Ministers reflecting our demands.

Our active work on this issue goes on till now. Presently, our efforts are concentrated on lobbying among responsible ministries and in the parliament in favour of the elaboration of a good and applicable law on genetically modified organisms.

In recent years we have taken active part in activities related to Water Management in partnerships at the national and European level. The Water Club, inaugurated in Blagoevgrad in April 2001, aims at raising public awareness and contributing to the implementation of the Water Act and the EU Water Framework Directive, as well as creating conditions for public participation in decision-making in the process of working out of Plans for Integrated Water Management by River Basins.

The Water Club is located in the centre of the city and is easily accessible to all inhabitants. Easily available to all visitors are side by side with the publications on GWP, EC DG Environment and EEA, also all novelties and regulatory acts related to water. According to the Water Act, Blagoevgrad will host the headquarters of one of the four basin directorates – the one that will control the watersheds of the rivers Struma and Mesta.

Water Talk is a newspaper for CEE countries.

The activities of the Water Club are oriented towards: (Pictures from discussions) 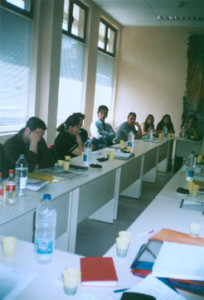 Improvement of the relationship and collaboration between the governmental bodies and local authorities, on the one hand, and the non-profit organizations and the broad public on the other hand. The Club maintains very good relations with the Regional Inspectorate on Environment and Waters, the Regional Hygiene and Epidemilogy Inspectorate, the Water Supply and Sewerage companies, the Irrigation Systems company, the Rila National Park etc.

Establishment of contacts with representatives of the local institutions, businesses, NGOs and young people from the universities and schools along the valleys of the two rivers – Struma and Mesta. To date 50 members have been registered, who wish to take part in the events organized by the Club and to receive the printed matter, disseminated by us. Among the members of the Club there are directors of companies and institutions, that gives us the right to state that our partners are not only individuals, but also institutions and companies.

The first joint activities were organized. An agreement was signed between the Water Club-Blagoevgrad and the Regional Inspectorate on Environment and Waters for working out of a programme for addressing pollution of water sources by industrial enterprises.

A women’s eco-club Vodoleya was created in the city of Pernik.

Water Club Blagoevgrad pays specific attention to youth. In mid-May a competition for young people was launched on the subject My Vision about Active Public Participation in Decision-Making and a public discussion was held with students from the Southwest University and club-members on the environmental problems at the upper stretches of the rivers Struma and Mesta. Interesting initiatives were proposed in the course of the discussion, related to the issue of how to involve the broad public in the efforts for sustainable use of water resources.

A Youth Club with the Water Club Blagoevgrad was also founded. At its initiative a register was set up, in which students enter information about problems, observed by them along the valleys of the two rivers. The students also launched the initiative to set up groups of „water fans“ in the human settlements where they live. The Water Club renders them technical assistance and aims at uniting their efforts.

An expert group of professionals – representatives of different institutions, businesses and NGOs – was set up with the Water Club -Blagoevgrad. They would design the future programme of work of the Club. They will be also the people, who will prepare competent position papers on behalf of the Club in the process of application of the European Water Framework Directive and the plans for integrated water management by river basins. Whenever necessary they will also provide the required support to the Youth group.

The Water Club organized and conducted the first street campaign under the slogan Water Partnership with the assistance of female representatives of the Hygiene and Epidemiology Inspectorate in the city of Pernik and the Water Supply and Sewerage companies from the cities of Blagoevgrad, Pernik and Dupnitsa. To this end a specific brochure under the title Water Partnership was published. It contained basic information about GWP, excerpts from the Bulgarian Water Act that affect the population and about which it does not have information. 15,000 copies were printed. The activity comprises also an opinion poll among the inhabitants. 685 people were polled.

The results of the survey are as follows: results

In order to popularize GWP activities and motivate young people 100 tennis shirts were purchased and stamped with the GWP logo. The children participated with great pleasure in the undertaking, which was welcomed by the inhabitants and reported in several media – the local TV and broadcasting (photos enclosed).

Ecosouthwest represented Bulgaria at the seminar on Improving Public Participation in the Implementation of the European Water Framework Directive, held in Budapest on 9-10 March 2001. One representatives of ours took also part in the seminar on Good Practices in River Basins Planning, held in Brussels on 29-30 May 2001 as part of the series of seminars on Implementation of the EU Water Framework Directive.

In the year 2000 we designed, with the help of Bluelink, a homepage reporting about our activities in the framework of anti-genetic campaign.

In 1999 we submitted a proposal to the Municipality of Blagoevgrad to introduce a new organization of urban waste collection and disposal. With its introduction the municipality has saved about USD 100,000.